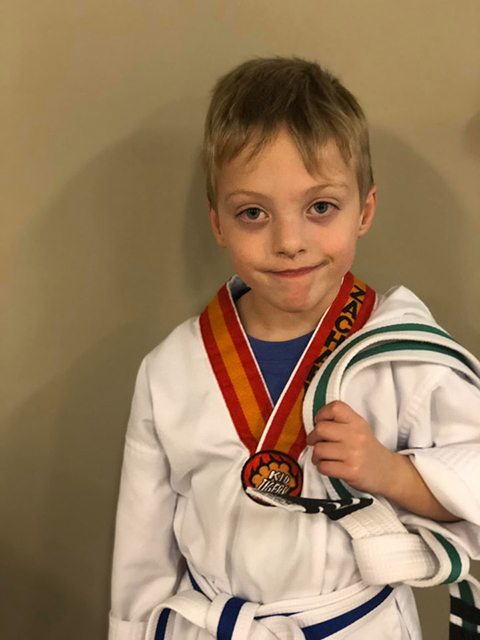 Choi Kwang Do in Action

Mandie Calvert was uncertain about enrolling her then 4-year-old son, Zachary, in Choi Kwang Do.

Zachary was born at 26 weeks as a micro preemie and weighed less that two pounds. Micro preemie babies have a survival rate of about 60 to 70 percent and about 40 percent of them have long-term health complications.

“Zachary has what’s called Sensory Processing Disorder,” she said. “He wasn’t able to stand well, and it took him as much as 18 seconds to respond to people and actions.”

But the family wanted him to try some activity. They had learned about Choi Kwang Do and decided that would be it.

A year after starting Choi Kwang Do, the family is thrilled.

“It’s been amazing,” she said. “It has helped with his balance, and now he responds to people and surroundings with almost no noticeable lag time.”

But a recent event at school sealed the deal as far as the family’s belief in Choi Kwang Do.

Apparently, a classmate was bullying and pushing Zachary. The classmate did it three times, and Zachary asked him not to each time. After the third time, Zachary went into his Choi Kwang Do stance and  threw a side kick and didn't make contact to show the other student not to mess with him and that he can defend himself. He did not make any contact, but the bullying stopped immediately.

“We were really proud of him,” she said. “I would 100 percent recommend Choi Kwang Do for any child – whether they have a disability or not.”

James Taylor, the owner of Choi Kwang Do of North Florida, expressed his satisfaction with Zachary’s progress and the way he handled the situation.

"Choi Kwang Do is a martial art for everyone,” said Taylor. “Even though Zachary has developmental issues, we don't have to treat him differently than any other student. He used a non-violent method to stop a situation from getting worse. People see martial arts as fighting. I say self-defense works when you avoid the fight to begin with."